Kunti was the biological daughter of Shurasena, a Yadava chief. Her birth name was Pritha. Kunti was the sister of Vasudeva, the father of Krishna and shared a close relationship with Krishna. Her father gave Kunti to his childless cousin Kuntibhoja.

Once Rishi Durvasa visited Kuntibhoja. Being extremely pleased by the all comforts, patience, and devotion offered by Kunti, he offered her a mantra that would invoke any god of her choice and he would bless her with children. 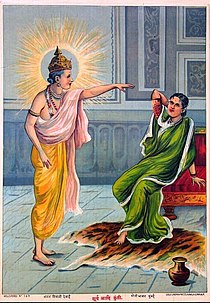 Out of impetuous curiosity, Kunti invoked the god Surya. Bound by the power of the mantra, Surya begot a child on her, and restored her virginity. To her surprise, the child was born with his sacred armor on. Out of fear of the public, Kunti abandoned the child, who later became famous as Karna.

Soon after, during his mission to expand his empire, Pandu married Madri, a princess of Madra in order to secure the vassalage of Madra. Madri was of the view that Kunti was inferior by birth to her because Yadavas were cattle herders while she was a princess. Kunti was disturbed by her husband's act, but eventually reconciled with him.

Pandu, while hunting in a forest, mistakenly shot and killed Rishi Kindama and his wife as they had taken the form of deer to mate. The dying sage placed a curse on Pandu since he had not only killed them in the midst of lovemaking but was not remorseful for his action. King Pandu argued with sage Kindama by misquoting sage Agastya's ruling on the right of Kshatriyas on hunting. Sage Kindama then decided to curse him to die if he ever should become intimate with his wife. Pandu renounced the kingdom and went into exile with Kunti and Madri.

Pandu could not make love with his wives due to the curse by sage Kindama. A remorseful Pandu renounced the kingdom and went into exile with Kunti and Madri. He met some sages and asked them a way for the heaven and salvation. They said, without children, one can never aspire for heaven. When Pandu expressed to Kunti his despair at the prospect of dying childless, she mentioned the boon granted to her. He advised her to beget children by suitable, illustrious men. Thus, Kunti used the boon granted to her by Sage Durvasa (which she had used to bear Karna) to bear three sons—Yudhishthira by Dharma - god of Justice; Bhima by Vayu - god of wind, and Arjuna by Indra - the king of Svarga (Heaven). She also invoked Ashvins for Madri on her behest and Madri gave birth to twin sons, Nakula and Sahadeva.

One day, Pandu, forgetting his curse, attempted to make love with his wife Madri. But, as a result of Kindama's curse, he died. Madri committed sati as she was the cause of his death. Kunti was left helpless in the forest with her children.

Hari Singh The King Of Jammu and Kashmir...

Hari Singh The King Of Jammu and Kashmir