Nalanda University (also known as Nalanda International University) is an international and research-intensive class located in the historical city of Rajgir, in Bihar, India. It was established by an Act of Parliament to emulate the famous ancient university of Nalanda, which functioned between the 5th and 13th centuries. The idea to resurrect Nalanda University was endorsed in 2007 at the East Asia Summit, represented mostly by Asian countries including China, Singapore, Japan, Malaysia and Vietnam, apart from Australia and New Zealand, and as such, the university is seen as one of the flagship projects of the Government of India. It has been designated as an "International Institution of National Importance" by the Parliament, and began its first academic session on 1 September 2014. Initially set up with temporary facilities in Rajgir, a modern campus spanning over 400 acres is expected to be finished by 2020. This campus, upon completion, will be the largest of its kind in India, and one of the largest in Asia.

The first Chancellor of the university was Nobel Laureate Amartya Sen, followed by former Singapore Minister for Foreign Affairs George Yeo. Nalanda is exclusively a graduate school, currently only offering Master's courses, with PhD programmes starting in gradual phases from 2020.

The proposed Nalanda International University campus, being built in Rajgir

On 28 March 2006 the 11th President of India A. P. J. Abdul Kalam proposed the idea while addressing the Joint Session of the Bihar Vidhan Mandal for revival of Nalanda university. The Nalanda University Bill, 2010[4] was passed on 21 August 2010 in Rajya Sabha and 26 August 2010 in Lok Sabha. The bill received Presidential assent on 21 September 2010[5] thereby becoming an Act. The University came into existence on 25 November 2010, when the Act was implemented.

Despite the international dimension of the project being repeatedly stressed, the total amount received from the participating countries in the East Asia summit, including Australia, China, Thailand, Laos and Indonesia, is Rs. 12.45 crore (1.8 million dollars. However, out of this total, one million dollars, promised by the Chinese, is earmarked for a Chinese style building on the campus). Surpassing the foreign government contributions, former Chancellor George Yeo’s initiative to raise funds from private Singaporeans has led to a pledge of 10 million Singapore dollars (Rs. 48.89 crore) for the library building. Japan promised to finance the construction but has not paid anything. Singapore may not pay for the library, now that Yeo has resigned.[6] Gopa Sabharwal has been appointed the first Vice-Chancellor of this university in February 2011.

It has been estimated that US$500m will be required to build the new facility, with a further US$500m needed to sufficiently improve the surrounding infrastructure. The group is looking for donations from governments, private individuals and religious groups.[7]

The State Government of Bihar handed over 443 acres (179 ha) of land acquired from local people, to the University, where construction work has begun.[when?] It is a dream project of the Chief Minister of Bihar Nitish Kumar.[8]

For best architectural design, a global competition was held for construction of an international state-of-the-art institution.[9][10] Vastu Shilpa Consultants have been selected as the winner of the design competition with dbHMS providing the triple net-zero energy, water and waste strategic plan.[11]

The academic session of the University started on 1 September 2014 with 15 students in the School of Historical Studies and the School of Ecology and Environmental studies. A hotel operated by Bihar State Tourism Development Corporation in Rajgir would provide initial hostel accommodation.

The School commences its operations with one year Post-Graduate Diploma Programmes in Japanese, Chinese and Sanskrit, but it will gradually expand to include other programmes in Indian and foreign languages..

The university's visitor is the President of India. The chancellor and chairperson of the governing board is Vijay Bhatkar. The vice-chancellor is Sunaina Singh. The governing board comprises the chancellor, vice-chancellor, five members from the countries with highest contribution (India, China, Australia, Laos and Thailand), a secretary, two representatives from the Government of Bihar, a representative from the Ministry of Human Resource Development, and three persons in the category of "Renowned Academician or Educationist", Arvind Sharma, Lokesh Chandra and Arvind Panagariya.[13]

Currently three schools have been established:

The following schools will be started later, in a phased manner: 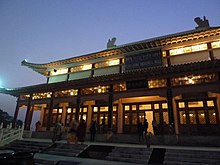