In some of the very long refracting telescopes constructed after 1675, no tube was employed at all. The objective was mounted on a swiveling ball-joint on top of a pole, tree, or any available tall structure and aimed by means of string or connecting rod. The eyepiece was handheld or mounted on a stand at the focus, and the image was found by trial and error. These were consequently termed aerial telescopes.[46] and have been attributed to Christiaan Huygens and his brother Constantijn Huygens, Jr.[44][47] although it is not clear that they invented it.[48] Christiaan Huygens and his brother made objectives up to 8.5 inches (220 mm) diameter[43] and 210 ft (64 m) focal length and others such as Adrien Auzout made telescopes with focal lengths up to 600 ft (180 m). Telescopes of such great length were naturally difficult to use and must have taxed to the utmost the skill and patience of the observers.[42] Aerial telescopes were employed by several other astronomers. Cassini discovered Saturn's third and fourth satellites in 1684 with aerial telescope objectives made by Giuseppe Campani that were 100 and 136 ft (30 and 41 m) in focal length.

The ability of a curved mirror to form an image may have been known since the time of Euclid[49] and had been extensively studied by Alhazen in the 11th century. Galileo, Giovanni Francesco Sagredo, and others, spurred on by their knowledge that curved mirrors had similar properties to lenses, discussed the idea of building a telescope using a mirror as the image forming objective.[50] Niccolò Zucchi, an Italian Jesuit astronomer and physicist, wrote in his book Optica philosophia of 1652 that he tried replacing the lens of a refracting telescope with a bronze concave mirror in 1616. Zucchi tried looking into the mirror with a hand held concave lens but did not get a satisfactory image, possibly due to the poor quality of the mirror, the angle it was tilted at, or the fact that his head partially obstructed the image.[51]

Light path in a Gregorian telescope.

In 1636 Marin Mersenne proposed a telescope consisting of a paraboloidal primary mirror and a paraboloidal secondary mirror bouncing the image through a hole in the primary, solving the problem of viewing the image.[52] James Gregory went into further detail in his book Optica Promota (1663), pointing out that a reflecting telescope with a mirror that was shaped like the part of a conic section, would correct spherical aberration as well as the chromatic aberration seen in refractors. The design he came up with bears his name: the "Gregorian telescope"; but according to his own confession, Gregory had no practical skill and he could find no optician capable of realizing his ideas and after some fruitless attempts, was obliged to abandon all hope of bringing his telescope into practical use.

Light path in a Newtonian telescope. 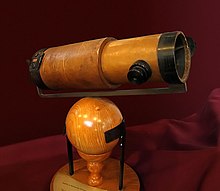 A replica of Newton's second reflecting telescope which was presented to the Royal Society in 1672.[53]

In 1666 Isaac Newton, based on his theories of refraction and color, perceived that the faults of the refracting telescope were due more to a lens's varying refraction of light of different colors than to a lens's imperfect shape. He concluded that light could not be refracted through a lens without causing chromatic aberrations, although he incorrectly concluded from some rough experiments[54] that all refracting substances would diverge the prismatic colors in a constant proportion to their mean refraction. From these experiments Newton concluded that no improvement could be made in the refracting telescope.[55] Newton's experiments with mirrors showed that they did not suffer from the chromatic errors of lenses, for all colors of light the angle of incidence reflected in a mirror was equal to the angle of reflection, so as a proof to his theories Newton set out to build a reflecting telescope.[56] Newton completed his first telescope in 1668 and it is the earliest known functional reflecting telescope.[57] After much experiment, he chose an alloy (speculum metal) of tin and copper as the most suitable material for his objective mirror. He later devised means for grinding and polishing them, but chose a spherical shape for his mirror instead of a parabola to simplify construction. He added to his reflector what is the hallmark of the design of a "Newtonian telescope", a secondary "diagonal" mirror near the primary mirror's focus to reflect the image at 90° angle to an eyepiece mounted on the side of the telescope. This unique addition allowed the image to be viewed with minimal obstruction of the objective mirror. He also made all the tube, mount, and fittings. Newton's first compact reflecting telescope had a mirror diameter of 1.3 inches and a focal ratio of f/5.[58] With it he found that he could see the four Galilean moons of Jupiter and the crescent phase of the planet Venus. Encouraged by this success, he made a second telescope with a magnifying power of 38x which he presented to the Royal Society of London in December 1672. This type of telescope is still called a Newtonian telescope.

Light path in a Cassegrain telescope.

A third form of reflecting telescope, the "Cassegrain reflector" was devised in 1672 by Laurent Cassegrain. The telescope had a small convex hyperboloidal secondary mirror placed near the prime focus to reflect light through a central hole in the main mirror.

No further practical advance appears to have been made in the design or construction of the reflecting telescopes for another 50 years until John Hadley (best known as the inventor of the octant) developed ways to make precision aspheric and parabolic speculum metal mirrors. In 1721 he showed the first parabolic Newtonian reflector to the Royal Society.[59] It had a 6-inch (15 cm) diameter, 62 3⁄4-inch (159 cm) focal length speculum metal objective mirror. The instrument was examined by James Pound and James Bradley.[60] After remarking that Newton's telescope had lain neglected for fifty years, they stated that Hadley had sufficiently shown that the invention did not consist in bare theory. They compared its performance with that of a 7.5 inches (190 mm) diameter aerial telescope originally presented to the Royal Society by Constantijn Huygens, Jr. and found that Hadley's reflector, "will bear such a charge as to make it magnify the object as many times as the latter with its due charge", and that it represents objects as distinct, though not altogether so clear and bright.

Bradley and Samuel Molyneux, having been instructed by Hadley in his methods of polishing speculum metal, succeeded in producing large reflecting telescopes of their own, one of which had a focal length of 8 ft (2.4 m). These methods of fabricating mirrors were passed on by Molyneux to two London opticians —Scarlet and Hearn— who started a business manufacturing telescopes.