History of the telescope 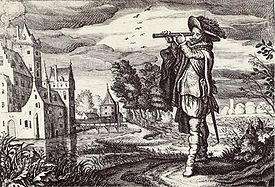 Early depiction of a "Dutch telescope" from 1624.

The history of the telescope can be traced to before the invention of the earliest known telescope, which appeared in 1608 in the Netherlands, when a patent was submitted by Hans Lippershey, an eyeglass maker. Although Lippershey did not receive his patent, news of the invention soon spread across Europe. The design of these early refracting telescopes consisted of a convex objective lens and a concave eyepiece. Galileo improved on this design the following year and applied it to astronomy. In 1611, Johannes Kepler described how a far more useful telescope could be made with a convex objective lens and a convex eyepiece lens. By 1655, astronomers such as Christiaan Huygens were building powerful but unwieldy Keplerian telescopes with compound eyepieces.[1]

Isaac Newton is credited with building the first reflector in 1668 with a design that incorporated a small flat diagonal mirror to reflect the light to an eyepiece mounted on the side of the telescope. Laurent Cassegrain in 1672 described the design of a reflector with a small convex secondary mirror to reflect light through a central hole in the main mirror.

The achromatic lens, which greatly reduced color aberrations in objective lenses and allowed for shorter and more functional telescopes, first appeared in a 1733 telescope made by Chester Moore Hall, who did not publicize it. John Dollond learned of Hall's invention[2][3] and began producing telescopes using it in commercial quantities, starting in 1758.

Important developments in reflecting telescopes were John Hadley's production of larger paraboloidal mirrors in 1721; the process of silvering glass mirrors introduced by Léon Foucault in 1857;[4] and the adoption of long-lasting aluminized coatings on reflector mirrors in 1932.[5] The Ritchey-Chretien variant of Cassegrain reflector was invented around 1910, but not widely adopted until after 1950; many modern telescopes including the Hubble Space Telescope use this design, which gives a wider field of view than a classic Cassegrain.

During the period 1850–1900, reflectors suffered from problems with speculum metal mirrors, and a considerable number of "Great Refractors" were built from 60 cm to 1 metre aperture, culminating in the Yerkes Observatory refractor in 1897; however, starting from the early 1900s a series of ever-larger reflectors with glass mirrors were built, including the Mount Wilson 60-inch (1.5 metre), the 100-inch (2.5 metre) Hooker Telescope (1917) and the 200-inch (5 metre) Hale telescope (1948); essentially all major research telescopes since 1900 have been reflectors. A number of 4-metre class (160 inch) telescopes were built on superior higher altitude sites including Hawaii and the Chilean desert in the 1975–1985 era. The development of the computer-controlled alt-azimuth mount in the 1970s and active optics in the 1980s enabled a new generation of even larger telescopes, starting with the 10-metre (400 inch) Keck telescopes in 1993/1996, and a number of 8-metre telescopes including the ESO Very Large Telescope, Gemini Observatory and Subaru Telescope.

The era of radio telescopes (along with radio astronomy) was born with Karl Guthe Jansky's serendipitous discovery of an astronomical radio source in 1931. Many types of telescopes were developed in the 20th century for a wide range of wavelengths from radio to gamma-rays. The development of space observatories after 1960 allowed access to several bands impossible to observe from the ground, including X-rays and longer wavelength infrared bands.

Objects resembling lenses date back 4000 years although it is unknown if they were used for their optical properties or just as decoration.[6] Greek accounts of the optical properties of water filled spheres (5th century BC) followed by many centuries of writings on optics, including Ptolemy (2nd century) in his Optics, who wrote about the properties of light including reflection, refraction, and color, followed by Ibn Sahl (10th century) and Ibn Al-Haytham (11th century).[7]

Actual use of lenses dates back to the widespread manufacture and use of eyeglasses in Northern Italy beginning in the late 13th century.[8][6][9][10][11] The invention of the use of concave lenses to correct near-sightedness is ascribed to Nicholas of Cusa in 1451.

The first record of a telescope comes from the Netherlands in 1608. It is in a patent filed by Middelburg spectacle-maker Hans Lippershey with the States General of the Netherlands on 2 October 1608 for his instrument "for seeing things far away as if they were nearby".[12] A few weeks later another Dutch instrument-maker, Jacob Metius also applied for a patent. The States General did not award a patent since the knowledge of the device already seemed to be ubiquitous[13][14] but the Dutch government awarded Lippershey with a contract for copies of his design.

The original Dutch telescopes were composed of a convex and a concave lens—telescopes that are constructed this way do not invert the image. Lippershey's original design had only 3x magnification. Telescopes seem to have been made in the Netherlands in considerable numbers soon after this date of "invention", and rapidly found their way all over Europe.[citation needed]

Claims of prior invention

Reproduction of one of the four optical devices that Zacharias Snijder in 1841 claimed were early telescopes built by Zacharias Janssen. Its actual function and creator has been disputed over the years.[15][16]

In 1655 Dutch diplomat William de Boreel tried to solve the mystery of who invented the telescope. He had a local magistrate in Middelburg follow up on Boreel's childhood and early adult recollections of a spectacle maker named "Hans" who he remembered as the inventor of the telescope. The magistrate was contacted by a then unknown claimant, Middelburg spectacle maker Johannes Zachariassen, who testified that his father, Zacharias Janssen invented the telescope and the microscope as early as 1590. This testimony seemed convincing to Boreel, who now recollected that Zacharias and his father, Hans Martens, must have been who he remembered.[17] Boreel's conclusion that Zacharias Janssen invented the telescope a little ahead of another spectacle maker, Hans Lippershey, was adopted by Pierre Borel in his 1656 book De vero telescopii inventore.[18][19] Discrepancies in Boreel's investigation and Zachariassen's testimony (including Zachariassen misrepresenting his date of birth and role in the invention) has led some historians to consider this claim dubious.[20] The "Janssen" claim would continue over the years and be added on to with Zacharias Snijder in 1841 presenting 4 iron tubes with lenses in them claimed to be 1590 examples of Janssen's telescope[16] and historian Cornelis de Waard's 1906 claim that the man who tried to sell a broken telescope to astronomer Simon Marius at the 1608 Frankfurt Book Fair must have been Janssen.[21]

In 1682,[22] the minutes of the Royal Society in London Robert Hooke noted Thomas Digges' 1571 Pantometria, (a book on measurement, partially based on his father Leonard Digges' notes and observations) seemed to support an English claim to the invention of the telescope, describing Leonard as having a fare seeing glass in the mid 1500s based on an idea by Roger Bacon.[23][24] Thomas described it as "by proportional Glasses duly situate in convenient angles, not only discovered things far off, read letters, numbered pieces of money with the very coin and superscription thereof, cast by some of his friends of purpose upon downs in open fields, but also seven miles off declared what hath been done at that instant in private places." Comments on the use of proportional or "perspective glass" are also made in the writings of John Dee (1575) and William Bourne (1585).[25] Bourne was asked in 1580 to investigate the Diggs device by Queen Elizabeth I's chief advisor Lord Burghley. Bourne's is the best description of it, and from his writing it seemed to consist of peering into a large curved mirror that reflected the image produced by a large lens.[26] The idea of an "Elizabethan Telescope" has been expanded over the years, including astronomer and historian Colin Ronan concluding in the 1990s that this reflecting/refracting telescope was built by Leonard Digges between 1540 and 1559.[27][28][29] This "backwards" reflecting telescope would have been unwieldy, it needed very large mirrors and lens to work, the observer had to stand backwards to look at an upside down view, and Bourne noted it had a very narrow field of view making it unsuitable for military purposes.[26] The optical performance required to see the details of coins lying about in fields, or private activities seven miles away, seems to be far beyond the technology of the time[30] and it could be the "perspective glass" being described was a far simpler idea, originating with Bacon, of using a single lens held in front of the eye to magnify a distant view.