Alex robert October 23, 2019 07:10:02 PM
5 minutes
share
Analysis of variance, or ANOVA, is a strong statistical technique that is used to show difference between two or more means or components through significance tests. It also shows us a way to make multiple comparisons of several population means. The Anova test is performed by comparing two types of variation, the variation between the sample means, as well as the variation within each of the samples. Below mentioned formula represents one way Anova test statistics: 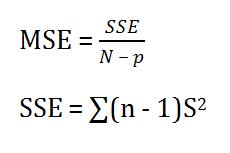 Where,SSE = Sum of squares due to errorS = Standard deviation of the samplesN = Total number of observations

For reference please go through the below-mentioned example:

Question 1: The following data is given: